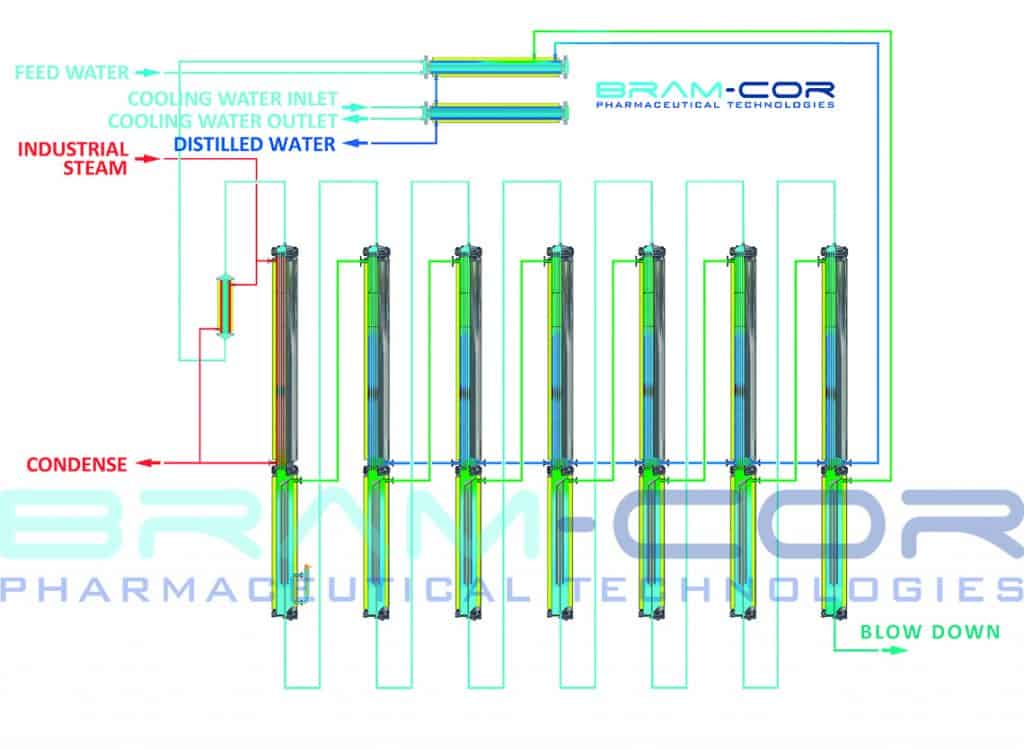 A PROVEN PROCESS BY EVAPORATION AND CONDENSATION

Multiple Effect Distillation process from Bram-Cor SMPT: heating for evaporation and cooling for condensation processes are performed by double tube sheet (DTS) exchangers. Condensation is achieved by means of the thin-falling film technology. The process is repeated in each column: the higher the quantity of columns  the lower overall the consumption of the equipment. The quantity of columns therefore does not influence the quality nor the output of the equipment.

A special labyrinth-separator installed at the top of each column separates the steam generated by the evaporation process from entrained substance in the steam itself. The result is a pure, “dry”, pyrogen-free steam, condensed in compendial Water for Injection.

The first column of the Multiple Effect Distiller may be used to produce alternatively or even at same time, also Clean Steam. 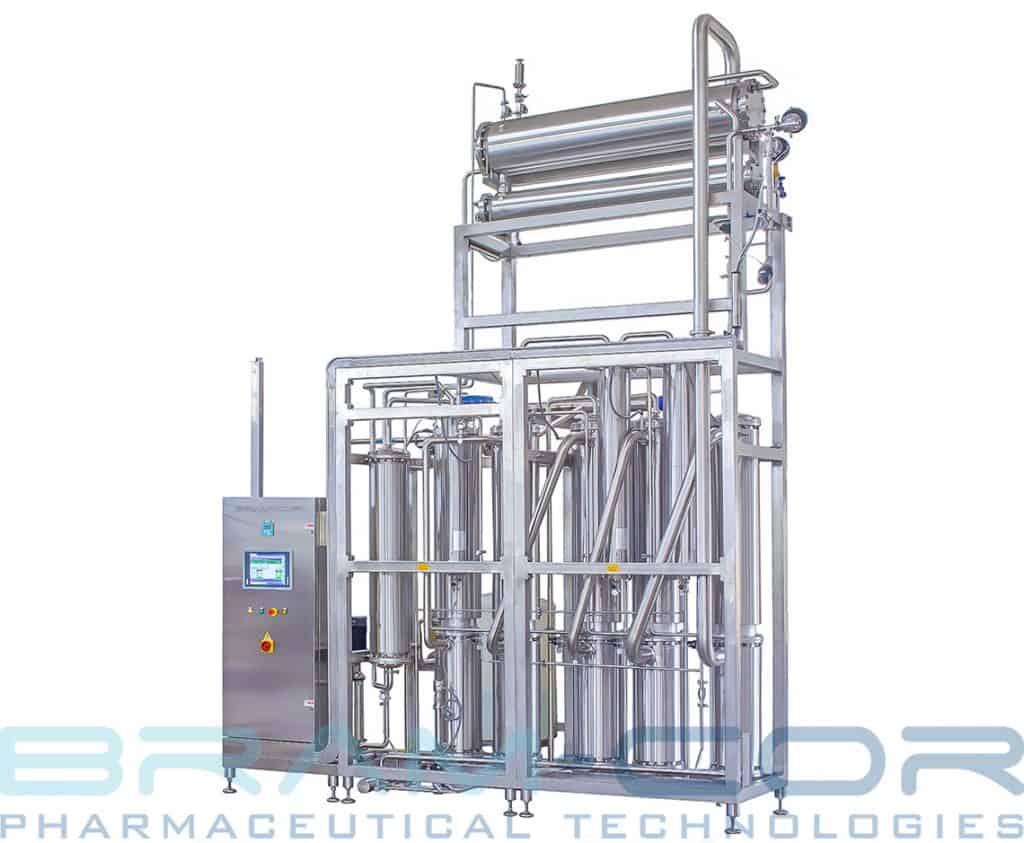 Note about column design: there are two main types of internal column design which drive the method of evaporation: falling film and natural circulation. A column designed on the falling film principle brings feedwater in from the top where it is flash evaporated as it falls over the heated interior tubes. Natural circulation fills the column from the mid-point of a column, filling it approximately one third; overflow is directed to the next column. Another consideration is the type of separation once water is evaporated in the column. Falling film relies on an initial 180 degree turn of the steam to remove heavier droplets and impurities, followed by centrifugal flow. Natural circulation relies on centrifugal flow from the outset; pure steam is then directed through a secondary separation system. The secondary separation is a select design by a particular manufacturer and will take the steam through a series of turns to remove any final impurities that may have been carried upward during the centrifugal separation. 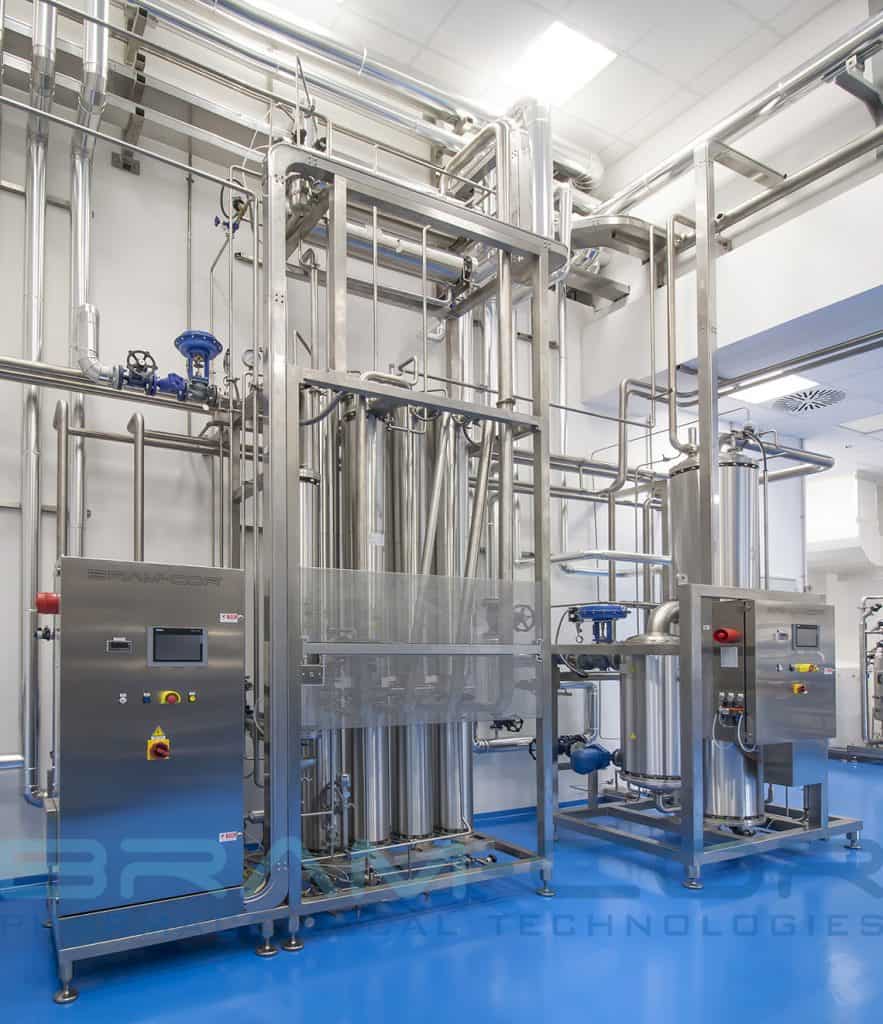 Note about preheaters and evaporators: preheaters will make the Multiple Effect still operate more efficiently in regards to steam and water consumption, but are not always a standard feature. A preheater can be installed prior to the first column for additional benefit, or prior to all columns for maximum benefit. Evaporators will be located internal or external to the column. The evaporators bear the brunt of varying pressures and temperatures. If there is any severe failure to the still, it will most likely be with the evaporator. For this reason, the first evaporator should have a double-tube sheet design; it should be decided in the specification process if all evaporators should be of double tube-sheet design since this is not a standard with all manufacturers.

Note about condenser design: the design of the condenser will partially determine the amount of cooling water required. Some are designed with smaller, more tightly compacted tubes providing a greater surface area for cooling final steam and distillate. Other considerations: is it fully drainable – both shell and tube sides? Whether cooling water flow is continuous or on/off will also have an effect on overall use of utilities. Likewise, if distillate temperature needs to be lowered from 97C, an aftercooler may be required. Finally, one should consider the degassing capabilities of the still. If removal of carbon dioxide is not adequately addressed through the pretreatment system, non-condensable gases could accumulate during production and a condenser may not be able to vent these gases adequately. The more effective stills will add a degasser to alleviate collection and release of gases with the final product.

In case of low capacities required (since MED systems absorbing much energy and cooling water) you can also get WFI from Single Effect Distiller (BRAM-COR Mod. DPSG), that is  both a Still and a Pure Steam Generator.

This website uses cookies to improve your experience while you navigate through the website. Out of these, the cookies that are categorized as necessary are stored on your browser as they are essential for the working of basic functionalities of the website. We also use third-party cookies that help us analyze and understand how you use this website. These cookies will be stored in your browser only with your consent. You also have the option to opt-out of these cookies. But opting out of some of these cookies may affect your browsing experience.
Necessary Always Enabled
Necessary cookies are absolutely essential for the website to function properly. This category only includes cookies that ensures basic functionalities and security features of the website. These cookies do not store any personal information.
Functional
Functional cookies help to perform certain functionalities like sharing the content of the website on social media platforms, collect feedbacks, and other third-party features.
Performance
Performance cookies are used to understand and analyze the key performance indexes of the website which helps in delivering a better user experience for the visitors.
Analytics
Analytical cookies are used to understand how visitors interact with the website. These cookies help provide information on metrics the number of visitors, bounce rate, traffic source, etc.
Advertisement
Advertisement cookies are used to provide visitors with relevant ads and marketing campaigns. These cookies track visitors across websites and collect information to provide customized ads.
Others
Other uncategorized cookies are those that are being analyzed and have not been classified into a category as yet.
SAVE & ACCEPT
Powered by